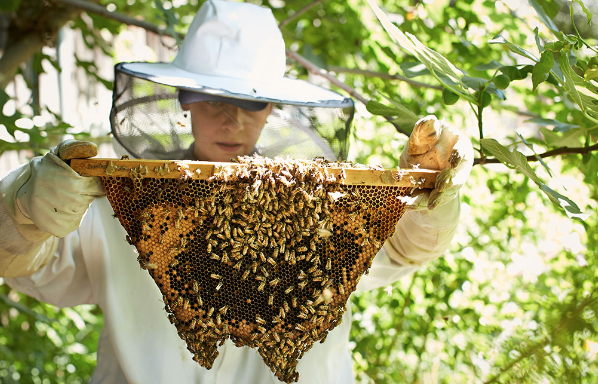 Beekeeping night seem like the craziest or most dangerous hobby anybody could possibly attempt, especially in an urban area. But actually, it can be fairly simple, since the bees do most of the work, flying over a mile to find the nectar and pollen in flowers. (Some estimates of flight indicate that they will travel as far as three miles to gather honey and pollen.)

Beekeeping in urban areas has become more popular in recent years, and a book titled The Rooftop  Beekeeper (Chronicle Books, 2014) gives excellent details on how a city dweller can successfully keep bees up on a roof top. I found this book especially interesting because I kept bees up on our urban roof for almost 20 years, and never had a problem. In fact, the neighbors did not even know the three or four hives up there even existed, until I shared some honey with them.

How I acquired these bees is itself an interesting story. A large swarm landed on a bush in the back yard one spring morning around 10 a.m. in the mid-1970s. I had no idea what to do with these critters, though I’d long been fascinated by their operations. In the afternoon I attended a union meeting, being on the board of our community college teachers’ union, a local of the American Federation of Teachers (AFT). I happened to mention that a swarm of bees landed in the back yard. Remarkably, another member of the board said that he kept bees, and would be happy to loan me a hive box to put them in, telling me to slowly and carefully brush them into the box.

With a fair amount of trepidation, I picked up his box, took it home, and shook the swarm into the box, miraculously without being stung. I placed the hive box on top of the neighbor’s flat-roofed garage, and watched them operate. Eventually, I opened the box and discovered a considerable stash of honey on the frames inside on which the bees build honeycomb.

This pleasant surprise forced me to buy a few tools: a hive tool to pry the frames out of the hive; a brush to wipe them away from the combs; a cheap “extractor” to get the honey out of the frames where the bees deposited it. The basic extractor is simply a small barrel with two (or more)  frames inside that hold the honey comb that the bees build on frames in the hive. First, you have to “uncap” the comb simply by taking a long knife and skimming off the wax deposited by the bees to seal the combs.

The holder for the frames is attached to a crank that spins the frames rapidly, sending the honey flying to the sides of the barrel and oozing down the bottom.  Centrifugal force at work. The honey is then drained out through a faucet near the bottom of the barrel.

When new swarms formed in the following Spring. I had already prepared some new hive boxes, and placed the new bees up on the relative flat roof surface of our house. (If you have a steeper roof, you will have to build a platform to keep the hives level.)

I always wore protection to prevent being stung. This simply consists of a veil, some long gloves, and light-colored clothes to cover you entirely. Bees are less likely to be alarmed by lighter colors.

Perhaps the most important precaution is to move very slowly.  Any swift or jerky motion can alarm the bees and make them more aggressive.

Following are a few illustrations of the bsasic materials needed. 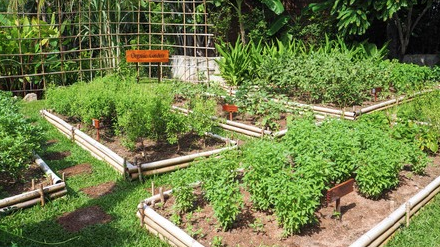 Grow your own food